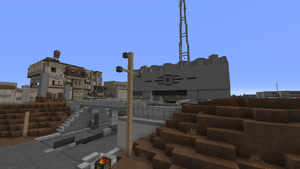 Vault 45 is the original home of the player in Fallout Dallas, acting as the spawnpoint of new players.

Several years before 2077, Vault 45 was constructed as an experimental "megavault"; the public knew only that there was only one vault for downtown Dallas.

When the Great War occured at 8:42 AM Central Time on October 23, 2077, citizens warned of the blasts on the East Coast quickly drove or ran to Vault 45. Thankfully for them, the first nuclear warheads to hit Texas were aimed at Fort Worth, landing at 8:56 AM. Fort Worth was deemed a better target to hit first, due to the large quantity of industrial production and military reserves there. Dallas was finally hit at 9:40 AM, but nearly all of those who had signed up for the Vault had easily arrived at Vault 45 by then. Of the 1,000 civillians who signed up, 946 arrived.

As people began rushing towards the Vault, security guards verified their credentials and sent them through, where they filed into an upstairs room and were sent down the elevator in groups of 19 people plus a single security guard per trip. At 9:30, the Vault's door was closed, as no one with Vault-Tec pamphlets was left at the security checkpoint.

Once everyone was moved downstairs, occupants were directed to their rooms, given keys to the doors, and began their period of life underground.

The Vault 45 Overseer and his friends, meanwhile, started the execution of their grand plan...

In 2057, with U.S. military tensions running high, and the Vault-Tec Vault program having begun three years earlier, secret government agents, part of the future Enclave, knew well that nuclear war was almost certain within a few decades. The Overseer, who worked secretly with Vault-Tec, directed the construction of a single, massive Vault for Dallas, with the objective of creating a Vault that would double as a headquarters of operation for the future Enclave. The Overseer selected 250 other military officials working with Vault-Tec as his Enclave army. Despite his former bouts of mental issues, he had made his way to general, largely because of his uncontrolled desire for power. His mad plan was to form a 250-man army that would, after waiting for radiation to be fully cleared, take over as much of the post-War world as possible. The Vault, as such, was given a secret armory filled with enough weapons to start a whole new war.

Scientists and technical experts in his group calculated that it could take nearly two hundred years for radiation to return to a level safe for leaving the Vault. A plan was devised whereby the group would enter cryostasis in order to survive for such a long period. The scientists, however, also warned the Overseer that cryostasis had not been tested in long-term scenarios, making the plan risky.

The Overseer decided to contact one of his friends, Duncan McGrady, another official in Vault-Tec who lived in Boston. Duncan had directed the construction of Vault 111, and was as such its Overseer. As the Vault 45 Overseer knew, Duncan had come up with the idea of experimenting with cryostasis in his Vault as his Vault-Tec experiment. Duncan agreed to provide the Vault 45 Overseer with regular updates on his cryostasis tests.

Various amounts of cryogenic equipment were brought into the Overseer's wing of the Vault; technicians from his 250-person group were assigned to use the material to work on and modify a massive cryochamber for Vault 45.

After the bombs fell, the 946 citizens moved into Vault 45 and, over time, became accustomed to life there; the Vault was well maintained, very spacious, and had plenty of amenities.

Communications were soon received from Vault 111, confirming that test subjects had quickly been placed in Vault 111's cryo chambers. For the next ten years, technicians secretly worked on producing the massive "cryo room" designed to hold everyone from the Overseer's coalition, using Vault 111's feedback to determine the best specifications.

The Overseer, however, was soon betrayed by a former oil tycoon named Earl Rubie, who leaked details of the plan to the vault dwellers. An uprising was soon staged, eventually overthrowing most of the Overseer's group.

However, the dwellers had not counted on the fact that the Vault itself was designed to function for only ten years; many Vault facilities, such as food production and storage, began to fail as designed. The dwellers were forced to use the cryochamber themselves to stay alive, as the Vault's main door could not be opened until the cryochambers opened. Thus the dwellers entered cryosleep for the next 200 years.

The interior of Vault 45 is comprised of a sprawling underground facility designed to contain its dwellers for an extended period of time.

Currently, new players spawn in the interior entrance room of the Vault, located between a blast door and the Vault's main inner "gear" door. Past the gear door, an elevator takes dwellers further underground into the other parts of the Vault.

The Vault's armory and hangar, which has a "skylight" exit connecting it to the exterior, is largely full of pre-War supplies and weaponry, including a sizable fleet of Vertibirds now operated by the Brotherhood of Steel.

The exterior of the Vault was largely empty except for a security gate until the Brotherhood of Steel began occupying the grounds in late 2287.

Outside of the Vault's blast door, a paved entrance roadway slants up from out of the Vault and to a security gate, which connects the entrance to Marsalis Avenue.

A large set of mostly-wooden buildings surround the Vault, built and largely used by the Brotherhood. On Marsalis Avenue, a small set of aircraft landing system pylons has been built in order to guide Vertibirds landing there during dark hours.

A seating area located in the entrance interior

The main interior door of Vault 45

Entrance channel as viewed from outside

2017 spawn room
Add a photo to this gallery
Retrieved from "https://fallout-dallas.fandom.com/wiki/Vault_45?oldid=2822"
Community content is available under CC-BY-SA unless otherwise noted.